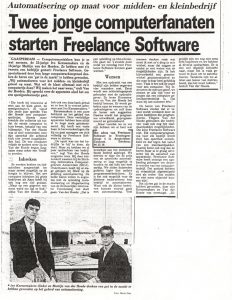 Martijn starts his journey at the age of 18 with Ivo Kerssemakers. At the time he is still living with his mother who is willing to give up the bigger bedroom for their office. This is 1990; there is no internet and Martijn and Ivo program in Clipper Summer ’87 version with Database dBase III Plus. This is the era of WordPefect and Lotus 123. Martijn also teaches as a freelancer at Computerij Opleidingen in Zwolle on various software packages. After having done many different projects for various SME entrepreneurs, it is time to opt for focus.

It is time to focus. After having made various customized packages for various SME entrepreneurs Martijn comes into contact with Van Hoeken Thoes Architects. For this architectural firm he develops a project administration software. Initially customized, this software becomes later the standard package Assistance Architect. From this moment on he completely focuses on the architectural sector in the Netherlands and later the Engineering sector.

1995 | Contract with the Dutch Association of Architects

After much lobbying there is a breakthrough in 1995 and they are recommended by the Association of Dutch Architects (BNA). Later in 1996 they are also recommended by NL Ingenieurs (the name is then ONRI). Assistance Architect is renamed Assistance AE (Architects & Engineers). A lot is invested in the functionality of the application and in the following years the market share grows to 70%.

2000 | Focus on the Professional Services Industry

The focus is now broadened on all Professional Services Organizations (the PSO Market) for which time and knowledge of employees is the most important production factor. Architect and Engineering firms remain important niches however new ones are now also the point of attention such as Consultancy agencies, IT and Software companies as well as other project-driven organizations. The package is named Assistance PSO and in 2002 there is a breakthrough with a customer such as Berenschot.

In 2004, the focus is now on the Microsoft platform. The package is completely redesigned on Microsoft SQL in a C # and .NET environment. Integrations with SharePoint and later also with Microsoft CRM are built. Links with other financial software become possible and the Time sheets are now fully integrated with Microsoft Outlook. Assistance PSO is renamed Assistance PSO for Microsoft Dynamics. And put on the market under the umbrella of Integrated Innovation.

Assistance Software exists for 25 years, and this is celebrated extensively, it is also a moment of reflection. The 2015-2020 growth strategy is determined by the shareholders: growing by attracting capital or merging with a larger player. An office is already started in America and people have been hired there. The company is being steamed for a next step.

In 2016, Assistance PSA is chosen by SPI Research as the most used PSA solution on the Microsoft Dynamics platform. It is the start of the Assistance Software Academy for supporting Partners and End Users. Launch of a full Suite under the name Assistance PSA Suite for the PSO market, with a PSA module, HRM, Financial, App for iPhone and Android and Vertical functionality. Focused on 6 branches with specific functionality. 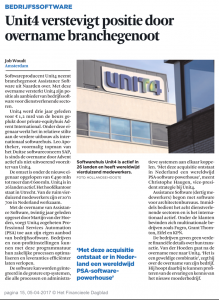 To be able to grow faster internationally, Assistance Software Group BV is sold to Unit4. Unit4 is active in 26 countries with a turnover of approximately 600m euro. After the merger Martijn leads the Unit4 Global PSO Center of Excellence, where he is responsible for the strategy, R&D and the enablement of the worldwide sales and consultancy teams.

Summer, 2018 Martijn leaves Unit4 and starts No Monkey Business, and uses his experience to help other entrepreneurs with their journey.